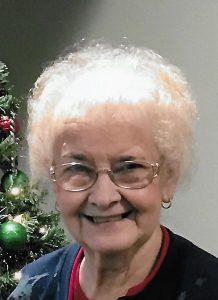 Joan Heffren, 85, of Red Oak Estates in Canton and formerly of Lewistown, passed away at 11:23 p.m. Tuesday December 29 at Graham Hospital. She was born June 25, 1935 at rural Lewistown, the daughter of Cecil L. and Margaret E. (Krider) Bainter. She married Rossie L. Heffren on September 10, 1955 at Havana. He died March 27, 2000. She was also preceded in death by her parents, one son, Gary Heffren, one daughter, Linda Keime, two brothers, Bill Bainter, and Robert Bainter, and one sister, Nancy Thompson. Survivors include five grandchildren, several great grandchildren, and several nieces and nephews. Joan was a homemaker. She loved working in her yard and walking for exercise. A graveside service will be held at 2:30 p.m. Monday January 4 at Oak Hill Cemetery at Lewistown with Pastor Shane Smith officiating. Memorial contributions may be made to the Lewistown Rescue Squad. Condolences may be made at henrylange.com