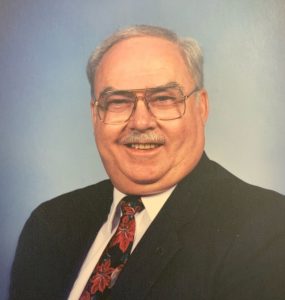 Richard Ivan Ray, 87, was called to his heavenly home on December 20, 2020, in Lincoln. Ivan was born on April 17, 1933 in Chandlerville to Fred and Edith (née Seaman) Ray, the third of seven children. He was raised in Mason County and attended Havana High School, from which he graduated in 1951. He married the love of his life, Elaine (née Morris) Ray on March 8, 1953. He left soon after to serve in the U.S. Army, reaching the rank of First Lieutenant during the Korean War, stationed in Germany. Following Ivan’s discharge from the service, he entered the field of business ownership and auto repair, first at Ray’s DX Service on U.S. Route 66, then at Modern Brake Shop on Keokuk, now Modern Brake and Alignment Shop at 1000 Commercial Park, all in Lincoln. Subsequent to all that, he became an independent insurance agent for many years. Ivan and Elaine attended Zion Lutheran Church, where they were both active in various aspects of ministry and service. Ivan was involved in the community, both as a businessman and serving on various committees, including the Board of Tourism. He was well-known as a man who loved God, his family, and his country. He was preceded in death by his wife of 64 years, Elaine, one son, Kyle Ivan, one grandson, Aaron Kyle, his parents, three brothers, and one sister. He is survived by two sons, Kevin (Linda) and Keith (Jeaneen) Ray; two daughters, Kimber Leigh (Dave) Brucker and Kara (Clay) Rull; 11 grandchildren: Liberty Canady, Mike Ray, Adam Charron, Ashleigh Mauhar, Allyson Leesman, Abi Wake, Amy Troyer, Adam Brucker, Austin Brucker, Shanna Covarrubias, and Emily Rull, and 19 great grandchildren: Lauren, Carter, Katelyn, Kinley, Tanner, Avery, Arrington, Addison, Hollis, Avia, Arastynn, Kobus, Weller, Micah, Kylie, Lyndon, Kian, Elijah, Judah, Caleb, and Isla. A private service is to be held on Wednesday, December 23. A celebration of Ivan’s life will be held some time in 2021. Memorials may be made to Zion Lutheran Church and School, The Christian Village, or the American Legion Post #263.