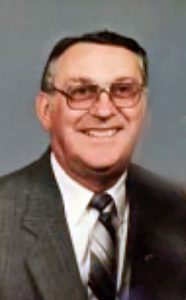 Francis Lee Clark, 89, of Cuba, passed away on Thursday, December 17 at Bickford Senior Living in Macomb. He was born on October 19, 1931 in Liverpool, to Samuel and Mary (Ashby) Clark. They both preceded him in death. He married Billie “Faye” (Cathey) on June 7, 1953 in Cuba. She preceded him in death in 2005. He is survived by his two children, David (Jeanette) Clark of Charlestown and Lynne (Joel) Waldrop of Canton, four grandchildren, Danielle (Dustin) Fuglsang, Christopher (Katie Copenhaver), Patrick (Dani) Waldrop, and Brian Waldrop, and four great grandchildren, Lincoln, Ava, Kynzie, and Zayden. Also preceding him in death are six brothers, Roy, Clarence, Harry, Marvin, Robert and Leslie. Francis is a Veteran of the United States Air Force, where he was stationed in Germany. After being discharged from the Air Force, Francis attended Western Illinois University, where he received his master’s degree in education. He taught industrial arts at Cuba High School and coached many different sporting teams for 33 years retiring in 1991. He was previously on the Cuba City Council and a member of the Putnman Township Board. Francis was a member of the Cuba Methodist Church, Cuba Legion and the Cuba Lions Club. He enjoyed gardening collecting coins, snow skiing, traveling and watching sports especially basketball and football. He was also a very talented woodworker making all sorts of furniture and wood carvings A funeral service will be held at Oaks-Hines Funeral Home in Canton on Monday December 28 at 2:00 p.m. where visitation will be held one hour prior to the services Burial with military honors will be held immediately following the services at Cuba Cemetery. Memorials may be made to the Alzheimer’s Association. Due to COVID-19 mandates a facial covering will be required and social distancing will be practiced. To leave online condolences please visit www.oakshinesfuneralhome.com