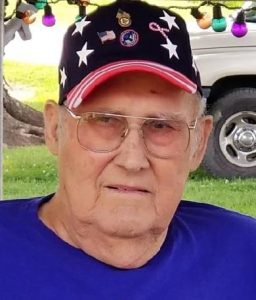 Earl Dennis Briney, age 87 of Bluff City, passed away at 8:04 pm Wednesday, December 16 at the Renaissance Care Center in Canton. He was born on August 11, 1933 in Bluff City, the son of Earl and Bernice (Hamm) Briney. On April 20, 1958, Dennis married Peggy Ann DeRenzy in Bushnell. She preceded him in death on November 22, 2011. Dennis was also preceded in death by his son, Douglas Briney, on October 8, 1989. He is survived by his daughter, Patricia (and Stan) Briney-Schisler of Browning, two grand dogs, Maggie and Willie, three step-grandchildren, Aaron (and Becky) Pierson, Stan (and Jennifer) Schisler, Jr., and Kimber Schisler, five step-great-grandchildren, two sisters-in-law, Linda Havens of Marietta and Barbara DeRenzy of Bushnell, two brothers-in-law, Kenny (and Nancy) DeRenzy of Macomb and Robert “Slick” DeRenzy of Canton, and many nieces, nephews, and cousins, including one special great-niece, Ashley DelMastro, RN, who took care of him at Renaissance Care Center during his final two months. Dennis was a US Navy veteran, serving from 1953 to 1957 at the end of the Korean War, where he took the world tour aboard the USS Cowell Destroyer. He was the founder of ED Double P Incorporated. He was the owner and operator of Earl and Earl D. Briney Trucking and farmed, earning the 2019 Master farmer of the Year in Schuyler County. He enjoyed bowling and was a member of the Havana Bowling Hall of Fame in Havana. He loved to travel, especially to the gambling boats. He enjoyed wood working, even building his own home. He was a classic car enthusiast and went to many car shows. Dennis was a member of the Hickory-Kerton Fire Dept., was founder and President of the Hickory-Kerton Water District, was the Multi Township Tax Assessor for Schuyler County, was a member of the Hickory Township Cemetery Board, the Astoria American Legion Post #25, and the Astoria Lions Club. He enjoyed breakfast at either the Browning Senior Center or the State Street Grill in Astoria, almost every morning. Services will be held on Monday, December 21 at 11:00 a.m. at Shawgo Memorial Home in Astoria. Interment will be in the Bluff City Cemetery with full military rites provided by the Astoria American Legion Post #25. Memorials in Dennis’ memory may be made to the Great River Honor Flight in Quincy or the Hickory Township Cemetery Board. Friends may call on Sunday, December 20th, beginning at 2:00 p.m. at the funeral home with family visitation from 4:00 p.m. – 6:00 p.m. Masks will be required and social distancing enforced.