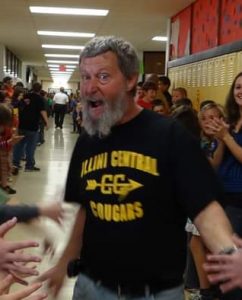 James “Jimmy” Albert Newell, 63, of Easton passed away on Friday, December 11 at Blessings Hospital in Quincy. He was born on January 6, 1957 in Pekin to Carlos and LaVerne (Sheely-Ryan) Newell. On September 30, 1979 in Mason City, he Married Sheila Kelly who survives. He is also survived by his children: Ivan (Wendy) Newell of New Bern, North Carolina and Staci (Eric) Sterchi of Morton, 4 grandchildren: Drew Newell, Madelyn Sterchi, Ethan and Jasmine Vance, 3 sisters: Mary (Mike) Buttry of Springfield, Polly (Mike) Cardello of Arizona, Peggy Stanbury of Springfield, 2 brothers: Martin Ryan of Massachusetts and Carlos Newell of Oklahoma. His parents, 2 sisters and a brother preceded him in death. Jimmy was a 1975 graduate of Mason City High School. He served in the United States Navy retiring in 1998 after 19 years of military service. He was employed by Illini Central School District as a custodian. He took over the Junior High track program in 2002 as the head coach and two years later added cross country coach to his resume and was also the middle school volleyball coach. Jim knew no strangers and would talk to everyone. He always had a smile on his face or a hug to give. If he gave you a hard time, you knew he liked you. Whether he was telling you a joke or lending an ear, he was there for you. He was also a huge Chicago Cubs fan. Cremation rites have been accorded and a celebration of life will be held at a later date. Online condolences may be left at www.hurleyfh.com. Memorial contributions can be sent to his family to help with the medical expenses. Hurley Funeral Home in Mason City is in charge of the arrangements.