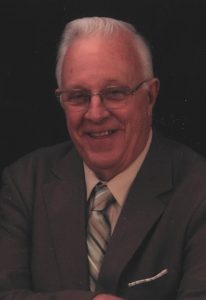 Gerald D. “Jerry” Walker, 77, of Marietta, passed away Friday December 4 at Blessings Hospital in Quincy. He was born on March 9, 1943 in Marietta, to Albert and Clara (Goldsmith) Walker. He is survived by his Wife Janet (Hammond) Walker, whom he married on May 20, 1962 at the Assembly of God Church in Bushnell. Also surviving are four children, Rusty (Sheryl) Walker, Mark Walker, Kim (Terry) Yocum, and Christopher (Kara) Walker, one brother Brian Walker, eleven grandchildren, Erin, Joshua, Kellie, Courtney, Kayla, Jessica, Colton, Carson, Kamron, Kelise, and Kirkland, seven great grandchildren, Abigail, Austin, Urban, Hudson, Olivia, Lexi, and Hazel and numerous nieces and nephews. He is preceded in death by his parents, one granddaughter Emily Yocum, three brothers, and three sisters. Jerry ran Alexander Lumber in Cuba, he also helped establish and worked for the Canton Lumber yard, he worked there for 42 years retiring in 2006. He was a Master Mason, belonging to the Canton Morning Star Lodge # 734. He was an active volunteer for Habitat for Humanity and was a past volunteer on the Marietta Fire Department. He served as Harris Township Supervisor for countless years. Most of all Jerry loved all his family especially his grandkids. Cremation rites have been accorded with Oaks-Hines Funeral Home in Canton. A burial of ashes will be held at a later date in Marietta Cemetery in Marietta. Memorials may be made to the American Heart Association or to Habitat for Humanity. To leave online condolences visit www.oakshinesfuneralhome.com