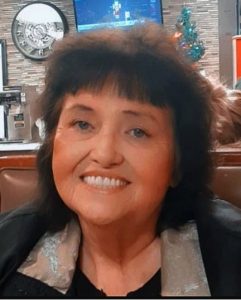 Carolyn (Ruffatto) Chasteen, 73, of St. David, passed away Sunday, November 29 at her residence with her family by her side. She was born on June 1, 1947 to Dominic and Melba (Scott) Ruffatto. She first married Harold Leroy Burgess and then later married Robert Chasteen. She is survived by her husband Robert of 36 years, daughter Dixie (Curt) Malott of St. David, son Dennis (Connie) Burgess of Canton, grandchildren, Haley (Tony) Belless, Emily Malott, Samantha Burgess, Sierra Burgess, Conway Burgess, brother Frank (Janet) Ruffatto sister Cindy (Jack) Hall, a very special friend, Bobby Hall, nieces and nephews and her beloved puppy Little Bear. From her marriage with Robert she has six stepchildren, surviving are Robert Chasteen, Kelly Mason, Marty Chasteen, Clinton Chasteen, Chad Chasteen, including their children and grandchildren. She is preceded in death by her parents, a little brother Ronnie and a “Sis” Agusta and one stepdaughter, Valerie Thompson. Carolyn loved God, she believed in the power of prayer, she enjoyed writing letters to friends, and family. She always wrote on the envelope “smile God loves you and so do I”. She loved camping, fishing and making memories with her grandkids. Cremation rites have been accorded through Oaks-Hines Funeral Home and Crematory in Canton. A burial of her ashes will be held at Greenwood Cemetery in Canton at a later date. In lieu of flowers memorials may be made to Buckheart Fire Department. To leave online condolences please visit www.oakshinesfuneralhome.com