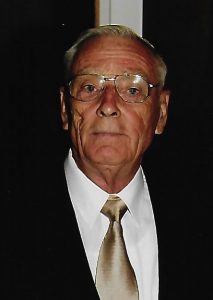 Thomas L. Shockley, Sr., 84, of Canton passed away on November 9th at OSF St. Mary’s Hospital Galesburg. He is survived by his wife of over 40 years, Edith L. Shockley, of Canton, whom he adored. He is also survived by his brother, Kenneth Shockley of Lenior City, TN, his children, Thomas (Becky) Shockley, Jr., of Panama City, FL, Wade Shockley of Paris, Misty Shepler of Canton, his step-children, Lori (Dan) Hostetler of Eau Claire, WI, Craig Fouts of Lewistown, his beloved grandchildren, Courtney Fouts, Jeffery (Constanza) Roeder, Megan (Adam) Opiekun, Ashley Samuell, Kelsey (John) Brandt, Quinn Shockley, Thomas Shockley, Brayden Shockley, Dylan Grigsby, his adoring sidekick Dash Shepler, and 5 great-grandchildren. He was born November 30, 1935, in Grinnell, Iowa to Kenneth F. and Anna LaChrista Shockley. They both preceded him in death. Also preceding him in death were his three sisters Hazel Shultz, Carlene Krumm, and Helen Cox. He grew up in Grinnell, IA and then served in the Marine Corps from 1953 to 1956. He owned Tommy’s Giant Foods in Bushnell, and also worked for New York Life before joining Supervalu where he was employed for 28 years, retiring in 2004. Tom returned to Supervalu part-time after his retirement and continued to work for them from home for several years. Tom loved his family and friends and was fiercely protective of each and every one of them. He enjoyed watching golf and tending to his rosebushes and his yard, both of which he was known for. A treasured Husband, Father, Grandfather, and Great-Grandfather, a part of our hearts has gone along with him. Funeral services will be held on Friday, November 13th at 1:00 p.m. at Henry-Lange Memorial Home in Lewistown with Pastor Becky Black officiating. Visitation will be one hour prior to the service. Burial will be in Waterford Cemetery with military rites conducted by Lewistown VFW Post 5001 and American Legion Bishop Post 1. Memorial contributions may be made to St. Jude Children’s Research Hospital, or the Greater Peoria Area Honor Flight. To view Tom’s life tribute video or to send condolences visit henrylange.com