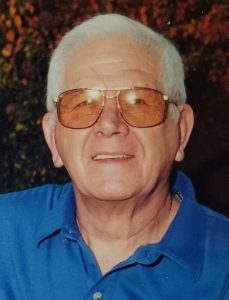 James R. Blane, 92, of San Jose, passed away on Sunday, November 1, at the Mason City Nursing Home. James Ronald Blane was born October 28, 1928, in Peoria, the fifth of eight children born to Elvia E. Blane and Marie Bitner. He was united in marriage to Margaret A. Rademaker on April 18, 1954. She preceded him in death. Surviving are his children: Sandra Blane (Lincoln), Jeffery (Diana) Blane (San Jose), two granddaughters, Brianne Cozart (Delavan) and Danielle Blane (Kenosha), and one great grandson, Paxton Cozart (Delavan). Jim graduated from Mason City High School in 1946. He held many jobs, working in the parts department for Brooks Motor Company in Mason City, Marten Motors in Emden, and Truman Woll & Sons in San Jose. He was also a gas station worker in Mason City when he got married and a route driver for Hanson Dairy in San Jose. Later he worked for the USPS in Mason City, both as a mailman and at the counter until his retirement. He joined the Army in February 1951 and was based in Germany while serving. He was Honorably Discharged in January 1956. He was a member of many organizations in his lifetime. He was a volunteer firefighter for San Jose, served many years on the Village Board, and also as Road Commissioner for Allen’s Grove Township. He was a member of the American Legion for 65 years. He also spent time as Coach and umpire for summer baseball. He loved woodworking, camping, time outdoors, and spending time with his children and grandchildren. James was a member of the First United Methodist Church in San Jose. Memorial may be made to the San Jose Fire Department.