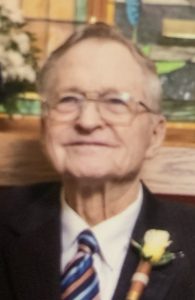 Raymond M. Renken, 90, of Mason City passed away on October 26 at OSF in Peoria. Raymond was born on January 17, 1930 in Natrona to John C. and Marie (Miller) Renken. He married Ruth Young who preceded him in death in 1953. He then married Joann Handke who preceded him in death in 2002. Surviving are three sons, John (Nancy) of Mason City, Keven (Bill Myerholtz) of Florida, Tim of Washington and two daughters, Laurie (Jeff Hoerbert) of Hartsburg, Deanna (Leonard) Hart of Stafford, VA., 6 grandchildren, 10 great grandchildren and 2 on the way. His siblings: Herbert Renken, Gerald (Barb) Renken, Marilyn Greve, Emily (Bill) Johnson and sisters-in-laws Joann Renken and Susan Renken. He was also preceded in death by his parents and brothers: Dale Renken, Weldon Renken and Robert Renken. He graduated from San Jose High School. He also served in the United States Army from 1953 – 1955. Raymond was a farmer in the Mason City area. He was a member of the St. Luke Lutheran Church where he served as chairman, vice chairman, elder and usher. He was a past president of the Mason County Pork Producers and past president of the Mason County Farm Bureau. He served on the Mason City School Board and was president for several years. Private family services will be held. Memorial contributions may be made to St. Luke Lutheran Church or the Mason City Area Nursing Home. Hurley Funeral Home in Mason City is in charge of the arrangements.