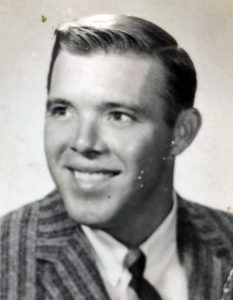 Larry Williams, 80, of Canton, passed away peacefully at 8:30 a.m., Thursday, October 22 at his residence in Canton. He was born on February 18, 1940 in Canton to Leonard and Pauline (Buley) Williams. They preceded him in death. Larry married Marcella (Marcy) Murphy on August 8, 1970 in Fairview. She survives along with three children; Suella (Andy) Kuenzl of Fairview, Aaron (Brandi) Williams of Canton, and Melany Williams of Austin Texas, and one sister Linda (David) Kesner of Canton. Also surviving are four grandchildren who were the light of his life, Jake Kuenzl, Taylor Williams, Nate Williams and Jackson Williams. Also preceding him in death are six siblings, Judy Lane, John Williams, Jim Williams, Vada Fogliani, Odell Colvin and Audrey Waner Larry worked many jobs, including Joes Market, Fairview Elevator, Midland Coal Company and Illinois Agricultural Association. He was a partner at V&W Electronics and a sales agent at Country Companies Insurance before retiring from Rockford Mutual Insurance Company in 2004. Larry was a Master Mason at the Masonic Lodge in Canton. Cremation rites have been accorded. A burial of ashes will be at Fairview Cemetery at a later date. Oaks-Hines Funeral Home and Crematory in Canton is in charge of arrangements. To leave online condolences, or to view Larry’s video tribute, please visit www.oakshinesfuneralhome.com