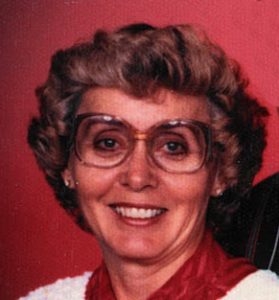 Patricia M. Bordner, formerly of Farmington and Canton, died at Country Comfort Retirement Home in Henry, Illinois on Tuesday, October 5. She was born November 27, 1933, in Peoria to Ray and Mary Huston. She graduated from Manual High School in 1951. She married Harold (Corky) Bordner on December 10, 1954 in Peoria. Her husband predeceased her on November 13, 2005. Survivors include one son, Steven R. Bordner of New Orleans (formerly of Lewistown) and two daughters, Sherry Miller of Henry and Shirley Schafer of The Villages, FL (formerly of Peoria), three grandchildren, Brandon Pettett, Drew Pettett and Whitney Hudson, along with four great grandchildren. She was a member of the First Presbyterian Church of Canton. She worked as an executive secretary at Westinghouse Air Brake Company (WABCO) and later at Caterpillar until becoming a full time mother. In later years she and her husband owned and operated the White House Motel in Farmington until retiring to Wee-Ma-Tuk Hills in 1983. She was an avid bowler and golfer as well as a bridge enthusiast. For many years she and Corky enjoyed spending winters at their home in Saint Petersburg, Florida often entertaining family and friends. She was entirely devoted to her family and eagerly followed the activities of her children and grandchildren with great interest until her death. Private graveside services will be held at Oak Hill Cemetery next to her husband. Oaks-Hines Funeral Home and Crematory in Canton has been entrusted with arrangements. Memorial contributions may be made to Country Comfort Retirement Home to benefit other seniors. To leave online condolences please visit oakshinesfuneralhome.com