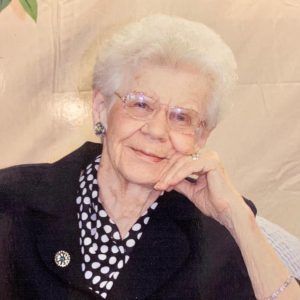 Addie I. Cohee Wise, 96, of Lewistown, passed away at The Loft, in Canton at 10:39 p.m., on Friday, September 18. She was born July 26, 1924, in Mason County to Marshall and Virgie (Hinds) Williams. She married James R. Cohee on June 6, 1942, in Kahoka, Missouri. He preceded her in death on April 10, 1996. She later married Leroy “Joker” Wise on October 11, 1997. He preceded her in death on March 10, 2009. Mrs. Wise is survived by one daughter: Carol (Les) Layton, of Jerseyville; daughter-in-law, Mary Cohee of Mapleton; three grandchildren and three great-grandchildren. She was preceded in death by her parents, two husbands: James Cohee and Joker Wise, three brothers, three sisters, one son, Jim Cohee, one grandson, Troy Layton, and one granddaughter, Amy Ward. Mrs. Wise was a member of 1st Baptist Church in Havana. She worked as a Dental Assistant for 18 years, a clerk at Hornsby’s in Havana and as a food preparer at Samples. She was a member of the 1942 graduating class of Bath-Lynchburg High School. Graveside services will be held at Laurel Hill Cemetery in Havana on Wednesday, September 23, 2020. Rev. Carol Stufflebeam will officiate. Memorial contributions may be made to 1st Baptist Church or the Alzheimer’s Association. Online memorial messages may be left for the family at www.hurleyfh.com. Hurley Funeral Home in Havana is in charge of arrangements.