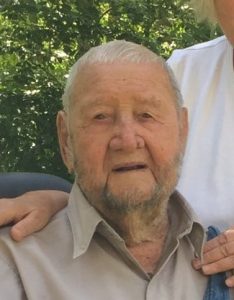 Curtis S. “Pap” Thompson, 98, of Chandlerville, passed away at his home, at 11:35 p.m. on Sunday, September 13. He was born June 10, 1922, in Kentucky, to Willie and Velda (Beaty) Thompson. He married Juanita Wooldridge on December 13, 1941, in Palmyra, Missouri. She preceded him in death on April 26, 2002. Mr. Thompson is survived by three children: Della M. (James W.) Creed of Ashland, Spencer E. “Hank” (Patty) Thompson, of Easton, and Michael (Debbie) Wooldridge of Chandlerville; as well as five grandchildren, thirteen great-grandchildren and fifteen great-great-grandchildren. Also surviving are his dear companion, Lou Anderson and a faithful companion, Bella. He was preceded in death by his parents, six siblings and one grandson. Mr. Thompson was a carpenter for over 30 years and was a member of Carpenter’s Union #16 in Springfield. He loved woodworking. Graveside services will be held at Kilbourne Cemetery at 11:30 a.m. on Wednesday, September 16. Memorial contributions may be made to Kindred Hospice. Online memorial messages may be left for the family at www.hurleyfh.com. Lintner-Hurley Funeral Home in Chandlerville is in charge of arrangements.