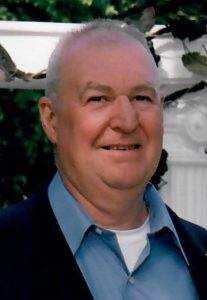 Jesse F. Barrett lived most of his life on his farm in Meredosia. As of late, he was a resident of the Illinois Veterans Home in Quincy. Jesse served in the U.S. Army and enjoyed sharing pictures and tales of his time serving in Germany. He worked many years at C.I.P.S. in Meredosia. He married Sharon K. Plunkett of Arenzville, and together they had four daughters. He loved to take road trips, near and far. He often visited historical sights, steam shows, flea markets, garage sales, and buffets. Many of these trips he shared with his girlfriend and companion, Sharon Shannon, who preceded him in death last Valentine’s Day. Jesse appreciated the simple things in life, like a cool, sunny day, a good bargain, “pulling someone’s leg”, and getting a bag full of free stuff at the fair. He enjoyed keeping collections of matchbooks, pamphlets, tools, keychains, cups, and bells. Jesse almost never missed church, and he said grace before each meal while holding hands around the table. He shared Jesus with his daughters by reading Bible stories to them while sitting on the floor next to their bed. Jesse passed into eternity Monday, Sept. 7, 2020, at 9:25 a.m. with his daughters around him. He is survived by three daughters, Linda (David) Gibson of Post Falls, ID, Debbie (Dave) Trojahn of Olive Branch, MS, and Molly (James) Dearing of Havana; seven grandchildren, Alex and Adam Gibson, Katie (Tommy) Gullo, Jacob, Luke and Ryan Trojahn, and Jack Dearing; and one great grandson, Wyatt Gullo. He was preceded in death by his parents, Jesse H. and Venus Lascelles Barrett; one daughter, Julia Lynn Barrett; and two brothers and two sisters, Donna Ramsey, Duane Ramsey, Patricia Baker (surviving husband Terry of Little America), and Ed Barrett. A graveside funeral service will be held 2 p.m. Saturday, Sept. 12, at Bethel Cemetery near Chandlerville. Due to restrictions and understanding that only 50 people can be in the funeral home at a time, a walk-through visitation will be held 5-7 p.m. Friday, Sept. 11, at the Buchanan & Cody Funeral Home in Meredosia. Condolences may be left at buchanancody.com.