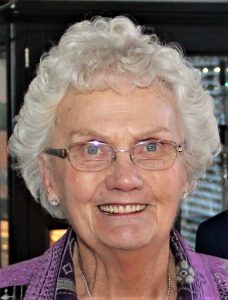 Alvena Marie Gathmann, 89, of Manito, passed away at Hopedale Nursing Home at 7:06 a.m. on Saturday, September 5. She was born November 7, 1930, in Havana, to George and Fay (Frye) Mohlman. She married Virgil Gathmann on July 17, 1960, at St. Paul’s Lutheran Church in Havana. He preceded her in death on April 19, 2019. Mrs. Gathmann is survived by two daughters: Janell (Ron) Durdle of Bloomington, Mardell (Dave) Wilson of Omaha, Nebraska; daughter-in-law, Julie Gathmann of Manito; six grandchildren: Delayne (Brittany) Durdle, Derek Durdle, Dedric Durdle, Natalia Gathmann, Jonah Wilson and Elliott Wilson; great-grandson, Emmett Durdle; as well as sister-in-law Doris Callaway of Pekin. She was preceded in death by her parents, husband, one sister: Georgia Fay Vaughn and one son: Craig Gathmann. Mrs. Gathmann was an active member of St. Paul’s Lutheran Church in Manito for over 60 years, where she served in various offices in the Tabitha Society. She led the Sunday School singing for over thirty years. She, along with her husband, served for many years as counselors for the LYF. She worked at Keystone Steel and Wire for 10 years before becoming a full-time homemaker. She was well known for her impressive garden and delicious pies. Funeral services will be held at St. Paul’s Lutheran Church, near Manito, at 2:00 p.m. on Tuesday, September 8. The church service will also be available via radio broadcast for anyone who would like to attend, but does not feel comfortable going inside the church. Social distancing and masks will be required in the church. Graveside services will follow the funeral at 3:30 p.m. at Meadow Lawn Cemetery in Manito. Rev. James Batchelor will officiate. Memorial contributions may be made to St. Paul’s Lutheran Church or Camp CILCA. Central Illinois Lutheran Camp Association (CILCA) offers Christian based Summer programs for students of all ages and abilities. Online memorial messages may be left for the family at www.hurleyfh.com.