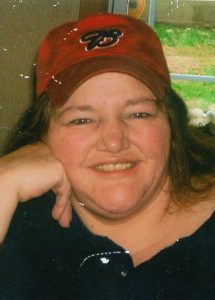 Billie June Dickson, 57, of Havana, passed away at Mason District Hospital in Havana, on Sunday, November 17, 2019, She was born on March 13, 1962 in Monmouth to William Dickson and Patsy (Lane) Dickson. Billie is survived by her sisters Rebecca (Larry) Rankins of Springfield and Mary Brooks (Virgil) McGinnis of Astoria, nieces Autumn Miller (Jon Brown)of Havana, Patricia Miller of Omaha, Nebraska, nephew David Dickson (Ally Moore) of Springfield, as well as Chelsea Thomas of Havana and Zachary Mibbs of Havana and a God child Kindra Neill of Augusta as well as many great nieces and nephews, and best friend Jeannie Woodson-Price of Mason City. Her parents, sister Cindy Dickson, brother Paul Lane, great nephew Tucker Evans, and her grandparents Nate and Martha Dickson of Lewistown and Russell and Jenny Lane of Bath preceded her in death. Billie was a member of Prevailing Faith Int’l. Church of Bluff City, where she drove the church bus for many years. She also served 10 years as a volunteer at the Mission of HOPE in Havana. She was a bartender and cook for many years in Havana. Even though she was never able to have children of her own, she was a mother to many. All kids loved her and endearingly called her Aunt Bea. She had a passion for those in need and over the years opened her home to many. Cremation rites have been accorded and a celebration of her life will be on Saturday, September 19th from 2 p.m. to 5 p.m. at Glory Days Ministry at 200 W. Main in Havana. All are invited and dinner will be served after service. In lieu of flowers, memorial donations can be made in Billie’s name to Prevailing Faith Int’l. Church or the Mission of HOPE. Vancil-Murphy Funeral Home of Springfield was in charge of arrangements.