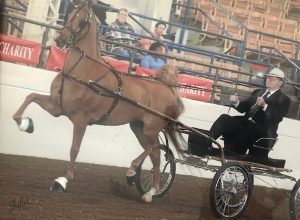 Allen A. H. Blessman, 91, passed away peacefully the morning of August 25. He was born at home five miles north of Mason City on October 4, 1928 to Jimmy and Edith Blessman. He is survived by his step-son Stephen W. Blessman, daughter-law Patricia Jones Blessman, two grandsons Joshua Allen Blessman and Ben Isaac Blessman, three great grandchildren Destiny, Amani and Niyah Blessman, a step-sister Janet Myers, four nieces: Jeanie Taylor, Janet Werner, Beth Krause and Karen Lowery as well as his step-nephew Jim Hoffert and step-niece Rhonda Knoles. He was preceded in death by his parents, brothers Eddie Blessman, Gail Thies and Earl Thies, his wife Ellen Blessman, his niece Diana Behrends, his nephew Jim Thies and his grandson Christopher Blessman. Allen had a passion for raising, breeding and showing American Saddle Bred horses. He won many trophies at the Illinois State Fair and the Midwest Horse Show as well as other regional and national horse shows. He also had a passion for volunteering in his community and was a member of the Methodist Men, American Legion Post and Optimist Club of Mason City. In 2011 he was recognized by the Illinois Department on Aging and received its Community Service Award with the following remarks: “Allen Blessman has made many contributions including his donation of two downtown buildings to the United Methodist Church, to open a second campus for its outreach ministry. He established the Allen A. H. and Ellen M. Blessman Foundation which provides funds for scholarships; he donated and participated in the planning of the Mason City Public Library; he participated in the founding of the Mason City Area Nursing Home; and he participated in the founding of the First State Bank of Mason City. Allen Blessman is a true leader and philanthropist.” Cremation rites have been accorded and a celebration of life will be held at a later date. Memorial contributions may be made to Mason City Area Nursing Home or Mason City United Methodist Church. Online condolences can be left at www.hurleyfh.com. Hurley Funeral Home in Mason City is in charge of the arrangements.