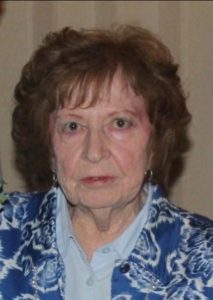 , 86, of Easton passed away on August 22 at Memorial Medical Center in Springfield. She was born on May 4, 1934 in Kilbourne to Albert and Eunice (McDaniel) Hodgson. She married Vertus D. Hovey in Lincoln on July 22, 1961. He preceded her in death on April 13, 1992. Mrs. Hovey is survived by her son, Michael (Cindy) Hovey of Havana and grandchildren, Shane (Devin Smith) Hovey and Jared (Tori) Hovey. She is also survived by her siblings, Darlene Dunbar of Chatham, Carolene (Jim) Banks of Canton, and Ted (Nancy) Hodgson of Williamsville. She was preceded in death by her parents, husband, and brothers Don Hodgson and Bobby Hodgson. Mrs. Hovey attended Mt. Zion Church. She worked as a hairdresser for many years. Graveside services will be held on Wednesday, August 26 at 3:00 p.m. at Easton Cemetery. Pastor Tim Lindsay will officiate. Memorial donations can be made in Mrs. Hovey’s name to Pets Without Parents. Online condolences may be left for the family at www.hurleyfh.com. Hurley Funeral Home in Havana is in charge of arrangements