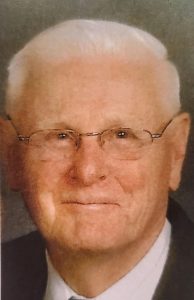 Walter Leon Karrick, age 95 a longtime resident of Havana and more recently of Backus, Minnesota interred into eternal rest on August 6. He was born in Springfield on August 3, 1925 to Walter Lee Karrick and Etta Evelyn (Frey) Karrick. Walter was united in holy matrimony to Joanne Sue Mulvey on August 8, 1948. She preceded him in death. They have 6 children: Robert (Ann) Karrick, Timothy (Jenny) Karrick, Clarissa (Fred) Smith, Scott (Sandi) Karrick, Andrew (Shannan) Karrick and Lynn (Cindy) Karrick. He has 12 grandchildren and 5 great grandchildren. Walter served in the Marines during WWII and fought in the South Pacific. He specifically participated in the Treasury-Bougainville Operation, the New Georgia Operation, the Consolidation of the Northern Solomon Islands and participated in the capture and occupation of the Island of Guam and the Marianas Islands. He received three degrees from Western Illinois University and a Doctorate degree from Indiana University. Walter worked in Education for 34.5 years as a teacher, principal, superintendent, college professor and college administrator. He spent his retirement years fishing, traveling and enjoying his family. Services will be determined at a later date. Memorials can be made to the First United Methodist Church in Havana, Illinois or Good Samaritan Hospice in Nisswa, Minnesota.