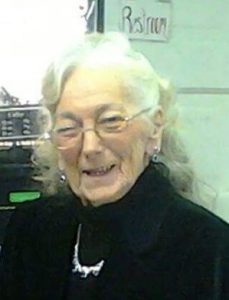 June M. Chambers, 80, of Bernadotte, passed away at 11:56 p.m. on June 19 at Graham Hospital in Canton. She was born on June 4, 1940 in Smithfield, the daughter of James A. and Virginia M. (Simms) Paul. She married Frank Chambers May 20, 1960 in Smithfield. He preceded her in death on May 3, 2001. Survivors include her 3 daughters, Kim (and August) Mauro of New Smyrna Beach, FL, Kelly (and James Dainty) Chambers of Ipava, and Dawn (and Terry) Volk of Bernadotte, 10 grandchildren, Richard Cobb, Stacie Cobb, Nicholas Mauro, Courtney Mauro, Daysha Chambers, Brie Volk, Garrett Volk, Terry Volk, Jr., Roman Volk, and Aaron Volk, 10 great-grandchildren, 4 brothers, Chet (and Elna) Paul of Galesburg, Jim Paul of Havana, Jack (and Debbie) Paul of the state of Tennessee, and Jay Paul of Seville, and her sister, Juwana (and Mike) Rutledge of Abingdon. She is preceded by her daughter, Tina Chambers, sister, JoAnn Ford, and brother, John Paul. June was a seamstress, working in a sewing factory. She also worked in the Deli at Day and Palin in Lewistown, DANA Corp in Havana, Blue Bell Factory in Bushnell, and Canton Manufacturing in Canton. She was a member of the Ipava Order of the Eastern Star. June enjoyed jigsaw puzzles, horseback riding, playing cards, and hunting. She loved to sew. The life of June Chambers will never be forgotten. Her name will live on in our hearts and in our minds for the rest of our lives. There is not one simple way to describe her that could ever do her justice. June Chambers was a lot of beautiful things. June was a loving wife, mother, grandmother, sister, and friend. She was caring and compassionate. June also an incredible sense of humor and a smile that could bring sunshine on the rainiest of days. These traits she shared with her three amazing daughters; Kim, Kelly, and Dawn. June always thought of others before herself. A graveside service will be held at 1:00 p.m. on Wednesday, June 24. at the Ipava Cemetery. The Ipava Order of the Eastern Star and Pastor Doug Krukewitt will be officiating. Interment will be in the Ipava Cemetery. Memorials may be made to the Ipava Order of the Eastern Star.