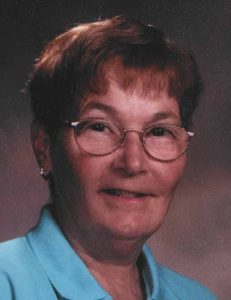 Kathryn M. Tarter, 87, passed away on Friday, June 12 at her residence. She was born on October 12, 1932 in Liverpool Township to Everett and Dolores (Fouts) Bull. They preceded her in death. She married Gerald A. Tarter on May 30, 1959 in Canton. He preceded her in death on January 23, 2004. Her son Tim Tarter, one brother Richard Bull and one nephew Michael Fleming also preceded her in death. She is survived by one sister, Patricia Mason of Canton, one sister-in-law, Marilyn Bull of Lewistown, one nephew, Rick (Darci) Bull of Liverpool, nieces, Carol Berberet of Havana, Denise (Terry) Bull Postin of Canton, great nephew, Ryan (Emily) Bull, great nieces Laura (DJ) Holmes, Rachel (Dylan) Bull Bundy, great-great nieces, Eva Holmes, Peyton Bull and great-great nephew, Knox Holmes. Kathryn worked for the Farm Bureau, Berwyn Johnson Insurance, Spoon River FS and lastly retired from Farm Service Agency. She volunteered at the YWCA for many years after retirement. She was a member of Mount Pleasant Church, and Charter member of Busy Bee’s 4H Club and later a club leader. As a member of the Fulton County Farm Bureau she received the Leo Sharp Agricultural Service Award. She was a proud supporter of the Lewistown FFA and Fulton County Fair. She enjoyed living on her farm and helped to support her nephews and nieces livestock shows and their activities. She enjoyed reading and was always sending cards to family and friends. She never missed a birthday card. The holidays were a special time and gave her an opportunity to make her homemade bows to put on the best wrapped presents anyone could receive. She had a knack for taking simple items and making fancy decorations out of them. She took great pride in her yard and flowers on her farm. A private graveside service will be held at White Chapel Memory Gardens in Canton. Oaks-Hines Funeral Home and Crematory in Canton has been entrusted with services. Memorials may be made to the Fulton County Farm Bureau Foundation Scholarship Fund. To leave online condolences, please visit www.oakshinesfuneralhome.com