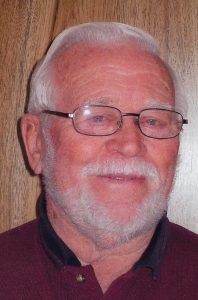 Stanley G. Gruber, 87, of Bartonville passed away at 11:45 p.m. on Thursday, April 2 at his home. He was born on January 16, 1933 in Astoria, the son of Jesse and Bessie (Bucher) Gruber. Stanley married Nancy Jakoby on July 12, 1952. Nancy preceded Stanley in death in January in 2005. Also preceding him in death are his 3 sisters, 3 brothers, 1 grandchild, and 2 great-grandchildren. Survivors include his 4 sons, James (and Janice) Gruber, with whom he resided, John (and Diane) Gruber, Mike (and Kim) Gruber, all of Bartonville and Stan (and Carrie) Gruber of Dunlap, 2 daughters, Carol (and Dale) Smith of Englewood, FL and Cathy (and John) Hawksworth of Winchester, TN, 14 grandchildren, 16 great-grandchildren, 3 great-great-grandchildren and brother, Bob (and Joyce) Becker of Washington state. He worked for Santa Fe Railroad, TPW, and Burlington Northern as a conductor and brakeman switchman until retirement. He was past president of Hollis Consolidated School Board. He belonged to the Knights of Columbus in CantonL. He enjoyed fishing, traveling, and spending time with family. Cremation rites have been accorded. A celebration of life will be held at a later date. The family would like to thank Unity Point Hospice for their care. Memorials may be made to Unity Point Hospice, 221 NE Glen Oak Avenue, Peoria, IL 61636