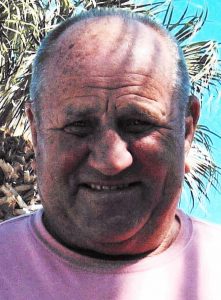 Leroy Hummel, 86, of Canton passed away Sunday, April 5, at his home in Canton. He was born on March 1, 1934 to Carl J. and Charlotte (Thompson) Hummel. Leroy is survived by his wife, Carol (Brown) Hummel, whom he married on August 30, 1975. Also surviving is one son Chris (April) Hummel, two grandchildren, Colin Hummel and Brittany (Corby) Taylor and one great grandson, Harper Taylor. Preceding him in death are his parents and one sister, Carole Beth Henderson. Leroy first worked as a plastering contractor, he was the owner and operator of Hummel Plastering Inc., later he was also farmed with his son Chris and now his grandson Colin. Leroy graduated from Lewistown High School in 1952, he played, baseball, football and basketball all four years. He was an avid water and skier and he was a fisherman with his grandson Colin. After his retirement from plastering he and his wife Carol purchased a house In Fort Meyers Beach, Florida where they spent their winters. Leroy fished every day, he cleaned and put them in the freezer, then had fish fries on his driveway for all his friends and neighbors. Leroy left behind many cherishable memories to end up in a place where, tractors never run out of fuel, every fishing hole is well stocked, and everything can be fixed with a hammer and WD-40. He will be remembered as the hard working, kindhearted, humble, role model and a family man. Due to the COVID – 19 Mandates a private graveside service will be held at Greenwood Cemetery in Canton. A Facebook live stream will begin of the service on Thursday, April 9, 2020 at 11 a.m. Memorials may be made to the American Cancer Society. A celebration of life will be held at a later date when permitted. To leave online condolences please visit oakshinesfuneralhome.com