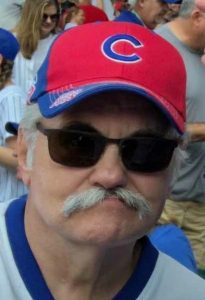 Gary Graham, 71, passed away Sunday, April 5, at his home in Canton. He was born on March 3, 1949 to William and Dorothy (Owings) Graham. They preceded him in death. He married Dianna Heitz on January 27, 1979 in Lewistown. She survives. Also surviving are two children Amanda Graham of Canton, Mickey Graham of Ellisville and two grandchildren, Waylon and Addilynn. He worked for International Harvester in Canton until its closing and later was a substitute school teacher for Fulton County, lastly teaching Jr and Sr High School retiring in 2014. Gary enjoyed baseball and NASCAR but most of all he loved being with his grandchildren. Due to the COVID – 19 Mandates a private graveside service will be held at Summum Cemetery. A celebration of his life will be held at a later date when permitted. Memorials may be made to the Canton Booster’s Club. To subscribe to schedule updates or to leave online condolences please visit oakshinesfuneralhome.com