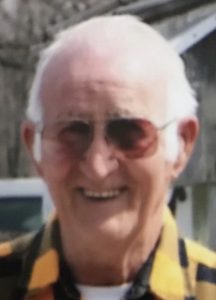 Raymond E. Dilts, 92, of Smithfield passed away at 3:55 a.m. Monday March 23 at his residence. He was born March 25, 1927 in Fiatt to Wesley and Ollivine (Rock) Dilts. He married Betty June Buffum on May 15, 1948 in Smithfield. She survives. Also surviving are three children and one son-in-law, Herb (Mary) Dilts of Marietta; Karen (Tom) Hall of Monmouth; Shirley (Scott) Laird of Macomb; son-in-law Eddie Cunningham of Marietta; seven grandchildren and several great-grandchildren. He was preceded in death by his parents, daughter Lorri Cunningham, one sister and two brothers. He graduated from Cuba High School in 1944. Raymond then served in the United States Navy during WWII, assigned to the Naval Construction Force, better known as the Seabees. He was a lifetime member of the Bushnell VFW Post 1422. After returning home he worked for International Harvester, Vaughan & Bushnell Manufacturing and later for Pabst Blue Ribbon before retiring in 1985. Raymond was an avid outdoorsman and absolutely loved fishing, hunting, and garden. He never met a stranger and truly enjoyed helping others. Private graveside services with Military Rites were held at the Marietta Cemetery with Pastor Jim Eddy officiating. In lieu of flowers memorial contributions can be made to St Jude. Martin-Hollis Funeral Home is in charge of arrangements. Please sign the guestbook and leave condolences at www.martinhollisfh.com