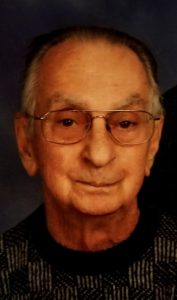 Robert Eugene (Doc) Morgan, DDS passed away on Wednesday, March 11 at Graham Hospital in Canton, Illinois. He was born March 21, 1929 to Robert David Morgan and Helen Ann Fillip in River Rouge, Michigan. He married Joan Wallbaum on June 16, 1957 at St. Paul’s Lutheran Church in Havana, Illinois. Dr. Morgan graduated Cum Laude from Loyola School of Dentistry, Maywood, Illinois. He was a Captain and dentist in the US Air Force. In 1957 he began practicing dentistry in Havana. Retiring from dentistry in the mid-1980s he lived in Havana until his death. He was a member of St. Paul’s Lutheran Church in Havana. He was an avid bowler, loved woodworking and was known for having one of the biggest gardens in Havana where he grew tomatoes and cucumbers. Dr. Morgan is survived by his wife Joan, his two children, Rebecca Jo Barbalace (Frank) and Bradley Robert Morgan, MD (Rachel) as well as 4 grandsons, Michael Flynn, Adam Barbalace, Nathaniel and Zachary Morgan. He is also survived by two brothers, Donald (Vivian) Morgan of Peoria and Frank Morgan (Connie) of Princeton. He was preceded in death by his parents, 4 brothers and 1 sister. He will be sorely missed by his family and friends. Visitation and funeral service will be on Saturday, March 14 at St. Paul’s Lutheran Church, 121 North Pearl Street, Havana. The visitation will begin at 10 a.m. with the funeral service following at 11 a.m. Rev. Bruce LaKamp will officiate. Graveside rites will be at Laurel Hill Cemetery, Havana. A luncheon will be served afterwards at St. Paul’s Lutheran Church. Memorial donations can be made in Dr. Morgan’s name to the donor’s choice. Online condolences can be left for the family at www.hurleyfh.com. Hurley Funeral Home in Havana is in charge of arrangements.