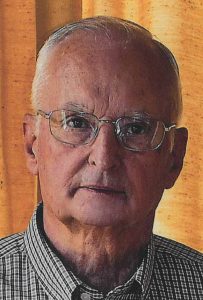 John Maurice Ridle, 92, passed away Wednesday, March 11 at his home in Canton surrounded by close family and friends. John was born July 3, 1927 to Glen and Garnet (Douglas) Ridle on a farm in Marietta, Illinois. He met his beautiful bride and wife of 70 years, Donita Faye Burnham, after the war and they were later married in Bushnelln October 27, 1949. John is survived by his wife, daughter, Janice Ridle of Canton, sons James (Silvia) Ridle of South Elgin, Joel (Sandy) Ridle of West Dundee, grandchildren, Jessica, Megan, Alexis, John, Dylan, Joel, Jake and Brandon Ridle, sisters, Barbara Moder of Oakland, N.J., Marie Mahoney of Soderstam, Pennsylvania, Brother-in-laws Carl and Bob Burnham and Sister-in-law Rose Stubenvoll. John was preceded in death by his parents, son Kenneth Ridle and older brother Floyd Ridle. He graduated from Bushnell High School in 1945. John served in the Navy during WWII and was privileged to be on board the Honor Flight to Washington D.C. He was a member of the Canton American Legion. John worked the last 29 years at United Ready Mix before retiring. He enjoyed seeing all his grandchildren and watching their activities. Visitation was held on Friday, March 13, at Oaks-Hines Funeral Home and Crematory in Canton from 5 p.m. to 7 p.m. A graveside funeral service with military honor’s followed on Saturday, March 14 at the Bushnell Cemetery at 10 a.m. Memorials may be made to Canton Park District Pool Players at the Senior Center. To leave online condolences please visit oakshinesfuneralhome.com