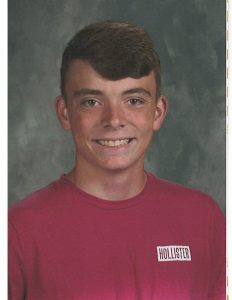 Ashton Michael Fernetti, 16, of Havana, passed away at 9:01 p.m., on Thursday, March 5. He was born December 9, 2003, in Pekin, to Bob and Sara (Ganther) Fernetti. Ashton is survived by his parents: Bob and Brittany Fernetti , and Evan and Sara Jones, all of Havana; four siblings: Elijah Fernetti of Pekin, Miles Fernetti of Havana, Carter Jones and Erica Jones, both of Havana. Also surviving are grandparents: Jodi and Mike Stout of Havana, Duane and Sandy Ganther of East Moline, Rhonda and Spencer Jones of Havana, Carl and Luan Fernetti of Bryant, and Cheryl Leeds of Canton; as well as great-grandparents, Henry and Ellen Cox of Havana; and many aunts, uncles and cousins. He was preceded in death by his grandmother, Marguerite “Susie” Fernetti, great-grandparents Otto and Beulah Belle Ganther, and one cousin, Drew Ganther. Ashton was currently a Sophomore at Havana High School where he was active on the Football, Baseball and Basketball teams. He enjoyed playing video games. He loved spending time with his family and friends. He worked for Stout Construction, during the summer at Havana National Bank and had also helped on the family farm. He had planned to attend Northern Illinois University after high school to play baseball and study to become a Chiropractor. Visitation will be held at Hurley Funeral Home in Havana on Monday, March 9 from 3 p.m. until 7 p.m. Funeral services will be held at Havana Church of Christ at 10 a.m. on Tuesday, March 10. Rev. Bill Boyce will officiate. Memorial contributions may be made to Havana High School Baseball or to the Havana National Bank where a memorial fund has been started. Online memorial messages may be left for the family at www.hurleyfh.com. Hurley Funeral Home in Havana is in charge of arrangements.