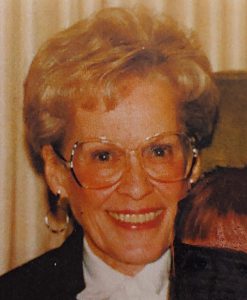 Virginia “Gimmy” Adkins of Havana, formally of Bloomington, passed away on Saturday, February 22 at 12:20 a.m. at Mason District Hospital in Havana. She was born April 9, 1919, in Elmwood, to Walter C. and Nellie Shoff Gibbs. She married Boyd J. Adkins on August 12, 1974, in Gatlinburg, Tenn. He preceded her in death on December 22, 1996. Gimmy is survived by step-daughter Marsha (Art) Wynn of Bloomington, nephew Robert Hayes of Havana, and many beloved great-nieces and great-nephews. She was preceded in death by her parents, 2 brothers, 5 sisters and step-daughter Janet Tennison. Gimmy graduated from Elmwood High School in 1937 and attended Illinois State University and Southern Illinois University. She taught kindergarten for a short time and later worked at HI-FI One Stop in Peoria for over 20 years. She loved selling records and would often meet rising young singers throughout her time there. After moving to Bloomington, she worked at Widmer Office Products, retiring in May of 1989. She belonged to Funks Grove Church and later attended Covell Community Church in Covell and St. Lukes Union Church in Bloomington. Gimmy had a great passion for dramatics and reading that began in school and continued throughout her life. In high school, she performed in numerous declamation contests, winning many competitions and medals. Graveside services were held on Monday, February 24 at 2:30 p.m. at Funks Grove Cemetery in rural McLean. Memorials can be made in Gimmy’s name to Mason County Pets without Parents at 29926 IL-10, Mason City, IL 62664 Final arrangements are entrusted with Quiram-Peasley Funeral Home of Atlanta.