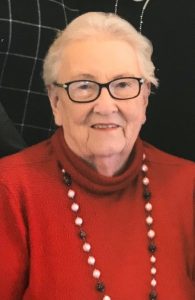 Ilene R. Derry, 88, of Smithfield passed away at 7:17 AM Saturday February 15, at OSF Health Care in Peoria. She was born November 16, 1931 in Smithfield the daughter of Estey and Elsie (Tarter) Stevens. She married Richard W. Derry on January 14, 1950 at Canton. He died September 9, 2003. She was also preceded in death by her parents and two brothers, Kevin and Harold Stevens. Surviving are four daughters, Diana (Mark) Fife of Canton, Sheila (Rick) Smith of Smithfield, Brenda (Tony) Shore of Kingsville, MO; and Teresa (Jeff) Milne of Kennesaw, GA; seven grandchildren and eleven great grandchildren. Ilene was a homemaker and a lifelong farmer. She was a volunteer at the Red Brick School and helped make noodles. She was a former member of the Fulton County Farm Bureau. Ilene loved to read, play pitch and work on crossword puzzles. She enjoyed traveling and spending time with her grandchildren and great grandchildren. Family was everything. Cremation will be accorded. A gathering of family and friends will be held from 5-7 p.m. Thursday at the Henry-Lange Memorial Home in Cuba. A family friend will say a few words and a prayer at 5 p.m. Private burial of ashes will be at a later date at Baughman Cemetery. Memorial contributions may be made to the Red Brick School or Grant Keime Memorial Trust. To view Ilene’s life tribute video or to send online condolences visit henrylange.com.