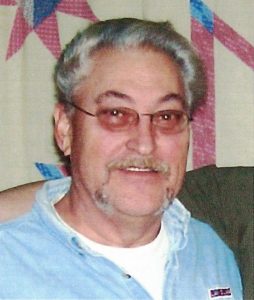 James E. Baughman, 74, of Havana passed away at the Richard Owens Hospice House in Peoria on February 10, 2020. He was born on March 1, 1945 in Cape Girardeau, Missouri to Clyde and Nina Baughman. He married Irene M. Carlson at the Church of the Nazarene in Havana on March 2, 1965. She preceded in him death on June 10, 2019. James is survived by one son, Bill (Robin) Baughman of Havana; one daughter Paula (Ken) Morris of Mahomet; grandchildren: C.J. (fiancée Emily Pottorf) Baughman of Petersburg, Amber (fiancé Brad Pence) Wolfe of Peoria, and Ashton Wolfe of Canton; and step-grandchildren Ryan and Colton Morris of Mahomet. He is also survived by his mother Nina Wolverton; sisters: Pat (fiancé Tony Cleer) Grindle and Martha Baughman, all of Havana; and several nieces, nephews, and friends. He was preceded in death by his father, brothers: Bob and Bruce; sisters: Lou and Etta; and grandson William C. Baughman, Jr. James worked at L Kahn and Sons Steel Supply for 19 years and also at the Havana Bus Barn for 13 years. He loved to fish and was a Civil War Reenactor with the 85th Volunteer Infantry for 16 years. His dog, Chance, was his best buddy and always by his side. He was a loving husband, father, grandfather, uncle, and son. Graveside services will be held at a later date. Memorial donations can be made in Jim’s name to the Richard Owens Hospice Home in Peoria. Online condolences can be left for the family at www.hurleyfh.com. Hurley Funeral Home in Havana is in charge of arrangements.