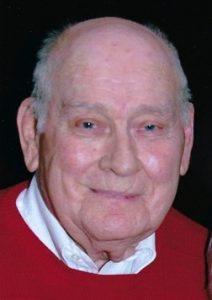 Richard L. “Dick” Southwood, 87 of Pekin, formerly of Fulton County, passed away on Friday, February 7, 2020 at Unity Point Methodist in Peoria. He was born on October 14, 1932 in rural Lewistown, the son of Hubert and Irma (Nall) Southwood. He married Marilyn Easley on December 11, 1955 at the Ipava United Presbyterian Church in Ipava. Dick is survived by his wife Marilyn of Pekin, three sons; Michael (and Janet) Soutwood of Canton, Neil (and Cheril Hammond) Southwood of Parrish, FL, and Klayton (and Tonya) Southwood of Secor, four granddaughters; Swenja (and Jon) Pascoe of Parrish, FL, Allison Southwood of Peoria, Chelsea Southwood of Chicago, and Kristyn Southwood of Secor, two grandsons, Chase Southwood of Lombard and Ryan Southwood of North Hollywood, CA, two great-grandchildren, Neil and Gabriella Pascoe, his sister Judy DeMoss and three half-brothers, James (and Janet) Dillow, Gerald (and Jane Hobbs) Southwood, and Gary (and Delores) Southwood. He was preceded in death by his parents Hubert Southwood and Irma Dillow, and one half-brother Ronald Southwood. Dick’s first career was with Illinois Bell Telephone for about 22 years and his second was also for about 22 years as a State Farm Insurance agent. He was a member of the First Christian Church in Pekin where he had served in various offices and taught a Sunday School class. He was also a 65 year member of the Ipava Masonic Lodge #213 AF & AM. Dick enjoyed spending time with his family and took pride in their accomplishments. He and Marilyn also enjoyed seeing and learning about other parts of the world, and felt fortunate and blessed to have been able to travel to all fifty states, 22 other countries, and a few islands. They made two trips to Guatemala to help build a church and medical clinic. Cremation rites have been accorded and a Celebration of Dick’s life will be held at his church on Saturday, March 14. Interment will be held in the Ipava Cemetery at a later date. Memorials may be given to the First Christian Church of Pekin.