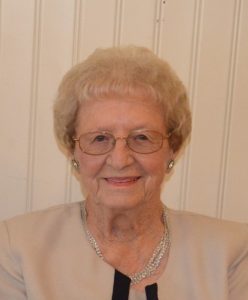 Willa Mae Harris, 92, of Mason City passed away Tuesday, January 14, 2020 at 2:12 p.m. at St. Johns Hospital in Springfield. She was born on October 29, 1927 in Greenview to William and Cleo (Brownfield) Beard. She married Gene Harris on July 9, 1946 in Oklahoma. He preceded her in death on June 16, 2019. Willa Mae is survived by her children: Bill (Joan) Harris of Mason City, Bob (Mary Anne) Harris of Mason City; grandchildren: Kyle (Tonya) Harris of Mason City, Libby (Dan) DeMerit of Fenton, MO, Megan (Brock) Nissen of Mason City, Ryan (Marnie) Harris of Dunlap, and Matt (Christina) Harris of Peoria; great grandchildren: Regan and Luke Harris, Ayda, Ellis and Drew DeMerit, Jax, Tripp and Sloan Nissen, Harper and Paige, Isabella and Millie Harris. Also surviving is one brother, John (Regina) Beard, of Lincoln. She was preceded in death by her parents, two brothers, one sister and her husband Gene. Willa Mae was a member of Mason City Community Chapel. She enjoyed baking, gardening and yardwork. She enjoyed camping and was a member of Sand Ridge Trail Riding Club. She and Gene were frequent visitors to the residents at Mason City Area Nursing Home. Most of all, she loved spending time with her grandchildren and great-grandchildren. Funeral services will be held at Hurley Funeral Home in Mason City, at Noon, on Friday, January 17. Visitation will be held from 10 a.m., until the time of the services. Burial will follow the services at Mason City Cemetery. Memorial contributions may be made to Mason City Community Chapel or Mason City Area Nursing Home. Online memorial messages may be left for the family at www.hurleyfh.com. Hurley Funeral Home in Mason City is in charge of arrangements.