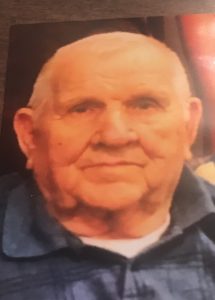 Loren R. Meeker, 93, of Manito, passed away on January 5, 2020, at Mason City Area Nursing Home. Loren was born on November 21, 1926, in rural Manito, to Samuel E. and Edith Whitaker Meeker. He married Mary Katheryn Quick on July 24, 1949, and she preceded him in death in 2012. He was also preceded in death by his parents, one son Darrel in 2005, one step granddaughter Rebekah Imig, and two bothers Clyde Meeker and Lyle Meeker. He is survived by one son Dale (Marcia) Meeker of Manito, one daughter, Lou Ann (Rick) Imig of Clinton, and one “adopted daughter” Mary Vawter of Bloomington. Loren has eight grandchildren; Sherry (Mark) Richardson, Mindy (Adam) Wendling, Daniel (Amanda) Meeker, Tammy (Bernie) Vogel, Christina (Gerome) Wiley, Shannon (Richard) Green, Loren (Jessica) Meeker, and Jared (Beth) Meeker; three step-grandchildren, Sarah (Nathan) Wheeler, Katherine Imig, and Andrew (Elisabeth) Imig; 26 great grandchildren, five great-great grandchildren; one brother Paul (Donna) Meeker and a bother-in-law Marvin (Peggy) Quick of Manito. Loren was a member of the Manito Community United Methodist Church, Mason Co Farm Bureau and served on the Meadow Lawn Cemetery Board for many years. He farmed in the Manito area his entire life, first with his brothers, Paul and Clyde, and his father, then later with his sons, Dale and Darrel. He shared memories of working with the draft horses, the first tractor they purchased, and how nice it was to have a tractor with a cab! He was very proud of his home farm being named a Centennial Farm in 2007. He was a proud Manito Tiger and loved watching several generations of his family play sports, as Forman Braves, Midwest Central Raiders, and Tremont Turks. He was inducted into the IBCA Hall of Fame in 2009 and recognized at a home basketball game as a super fan. Loren had his routine of “opening” the coffee shop in the mornings and then spending time in the back of Manito Hardware with friends. He always drove around in his truck to check on the farming progress in the area. Funeral services will be held at 11 a.m. Wednesday, January 8, 2020 at the Manito United Methodist Church. Pastor Steve Oaks will officiate. Visitation will be from 9 a.m.. until the time of service at 11 a.m. Burial will be in Meadow Lawn Cemetery, Manito, Illinois. Memorials may be made to the Midwest Central Booster Club or to Mason City Area Nursing Home. The family wishes to thank the staff at Mason City Area Nursing Home for the wonderful care they gave Loren while he was a resident and for the support they gave to the family. To leave an online condolence go to www.hurleyfh.com. Maas-Hurley Funeral Home Manito assisted the family with arrangements.