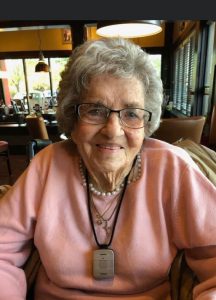 Mervin H. Montgomery, 96, of Springfield formerly of Mason City passed away on December 15, 2019 at 9:40 p.m. at Memorial Medical Center in Springfield. She was born on July 5, 1923 to Howard and Rosebud (Smith) Haywood. On December 23, 1943 she married Ray H. Montgomery who preceded her in death in 1994. Mervin is survived by three daughters: Mona (Charles) Dudley of Texas, Deborah Livengood of Pekin, and Pam (Mark) Wood of Raymond, 12 grandchildren, 27 great-grandchildren and one great-great-grandchild and two brothers: Dr. Carl Haywood of Nashville, TN and Smith Haywood of Huntsville, AL. She was preceded in death by her parents, husband, sister Evelyn Crawford and son-in-law Ronald Livengood. She graduated from Robert E. Lee Institute and attended business college in Atlanta Georgia. She was a member of the Mason City Methodist Church and retired from the State of Illinois as Senator Sam Vadalabene’s secretary. She enjoyed sewing, crafts, playing dominoes with her lady friends and traveling with her husband to craft shows selling their wood crafts. Mervin was a past president of the American Legion Lady Auxillary LaFemmes. Cremation rites have been accorded and a burial of ashes will be held at a later date at Mason City Cemetery. Memorial contributions may be made to Susan G. Koman Breast Cancer Foundation. Cain-Hurley Funeral Home in Mason City is in charge of the arrangements.