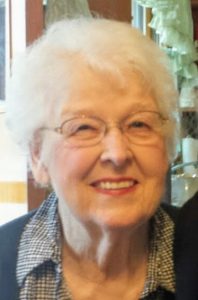 Stella Helen Stinauer, age 86, of Havana, passed away at Havana Health Care Center at 1:50 a.m. on Saturday November 30, 2019. She was born December 11, 1932, in Chicago to Stanley and Anna Mary Malin. She married Rudolph “Rudy” Frank Stinauer on October 3rd, 1953 in Chicago and was married 61 wonderful years until his death on October 7, 2014. Stella is survived by one son Dr. Robert (Cheryl) F. Stinauer of Havana, and four daughters: Vicki A. Lane of Havana, Diane (Dave) M. Stinauer of Omaha NE, Joanne M. Nordstrom of Lakewood CO and Teri (AJ) A. Thomas of Metamora, and 7 grandchildren: Seth Lane (Amy), Curtis Lane (Erin), Dr. Jesse Stinauer, Dr. John Stinauer (Anna), Jay Stinauer, Andrew Thomas, and Anna Thomas and 7 great grandchildren, Zoey, Bryar, Olivia, Elise, Quinn, Evette and Mia. Also surviving are one brother Albert A.(V. June) Malin of Granger, IN and one sister: Lillian (Ivars) Liliensteins of Shelby, NC. She was preceded in death by her parents, husband, brothers: Stanley R. Malin, Henry Edward Malin, sisters Anna Elizabeth Malin, Anna Sophie Urchel of Gobles, MI and one daughter at birth Theresa A. Stinauer in 1962. Stella was a homemaker and her family always came first in her life. She was known throughout central Illinois for her cake decorating business for over 50 years. She made all types of decorated cakes from simple to very complex wedding cakes and she won several blue ribbons at the IL State Fair for her decorating excellence and also taught the art of cake decorating for several years from her home. Stella later expanded her talents into catering weddings. Stella also worked as a secretary at the Havana grade school for several years. She was an outstanding seamstress and could make almost anything on her sewing machine. Stella was very active in her community in bridge clubs and the local Beta Sigma Phi Sorority. She was a charter member of the Havana ladies investment group called the Riverside Investment Club and she enjoyed following her stock selections. A devout Roman Catholic Stella was active in the St Patrick’s parish in many capacities: President of the Altar and Rosary Society, member of the Parish Council and building committee. Visitation will be at St. Patrick’s Catholic Church on Saturday, December 7 from 9 until 11 a.m. with Rosary at 11 a.m. Mass of Christian Burial will immediately follow the Rosary. Burial will follow the services at Laurel Hill Cemetery in Havana. Fr. David Whiteside will officiate. A funeral luncheon will be served at the church hall after the graveside services. Memorials can be made to St Patrick’s Altar and Rosary Society, The National MS Society and the Shriners Hospital for Children. Hurley Funeral Home in Havana is in charge of arrangements.