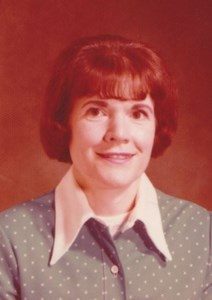 Joanne (Howe) DeBruine of San Antonio, Texas, formerly of Havana, passed away Friday, November 29, 2019 at the age of 89. She was born to Roy and Gertrude Howe in Rock Falls on June 19, 1930. She was a beloved wife and mother leaving behind her two children, daughter Julie, her husband Joe and their two grandchildren and son Robert, his wife Janet and their four children and one grandchild. She is also survived by three Brothers-in-law and five Sisters-in-law. She was preceded in death by her parents, husband Ron and two grandchildren as well as her nine brothers Donald, Fay, Bill, Bob, Russell, Ted, Cal, John and Tom and five sisters Madolyn, Marjory, Evelyn, Mary and Lynette. Joanne was one of 15 children. She graduated from High School and then soon thereafter, riding on a train, headed to St. Louis as a young lady to enter nursing school. She then graduated as an RN and began practicing in St. Louis and then moving to Michigan where she practiced as a pediatric nurse and met her husband, Ron. Joanne was fortunate enough to have experienced the thrill of seeing her brother pitch as a member of the Chicago Cubs. She was both an avid baseball and basketball fan. She will be sorely missed by her children and remaining family. A Memorial Service is being held Tuesday, December 10, at 6 p.m. at the Colonial Funeral Home, Universal City, Texas. Please sign the guestbook at www.colonialuniversal.com