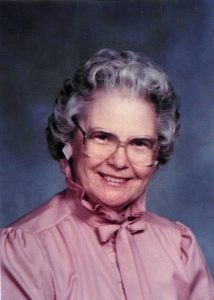 Wanda L. Williams, 92, of Canton, passed away Tuesday, November 19, 2019, at Graham Hospital in Canton. She was born on April 8, 1927 in rural Fulton County to Floyd and Frances Lucille (Hipple) Hughes. Wanda married Cecil A. Williams on February 2, 1946 at the Monterey United Methodist Church, he preceded her in death on April 1, 2004. Surviving are three children, Cherrie (the late Wilson) McKinlay of South Uist, Scotland, Chris (DeAnna) Williams of Monterey, and Jody (David) Burnham of Bryant, one daughter in law Kathy Williams of Pekin, twelve grandchildren and seventeen great grandchildren. Preceding her in death are her parents, husband one son Andy Williams, and one grandson, Geoff WIlliams. Wanda graduated from Canton High School in 1944, she later graduated from Western Illinois University in 1965. She was a teacher at Farmington High School from 1966 until 1978. She was a member of the Monterey United Methodist Church for 64 years where she taught Sunday School and Vacation Bible School, she also served on many committees. She was a lifetime member of the NEA, she was the leader of the Monterey 4-Hers for 55 years and was voted into the 4-H Hall of Fame in 2011. Wanda was the teacher of the year in 1968, 1971 and 1978, as well as the Canton Daily Ledger Women of the Year in 1984. She also served on the Fulton County Board from 1984 until 1998 and was a chairman from 1996 until 1998. A Visitation will be on Thursday, December 5 from 5 until 7 p.m. at Oaks-Hines Funeral Home and Crematory in Canton. A memorial service will be held on Friday, December 6 at the Monterey United Methodist Church in Monterey at 11 a.m. A burial of ashes will be held at a later date at Walnut Cemetery. Memorials may be made to Monterey United Methodist Church or to Fulton County 4-H. The family would like to thank the caring staff of Red Oak Estates for the past six years of care they gave. To view Wanda’s video tribute or to leave online condolences, please visit www.oakshinesfuneralhome.com.