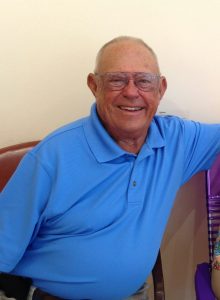 Larry A. Lines, 85, of Morris, passed away Monday, November 4, 2019 at Morris Hospital. He was born June 21, 1934 in Canton the only child of the late Harry and Leah (Stevenson) Lines. Larry graduated from Morris Community High School with the Class of 1952. He also attended Kendall College. He married Ruth Kindlespire on April 9, 1954. All who knew them noted that they were basically inseparable from that day on. Ruth preceded Larry on July 3, 2013. Larry served as a Master Sergeant with the National Guard for 9 years and worked for Caterpillar for 43 years. Larry Lines loved his family dearly. He was a man with a great sense of humor and a warm heart. Many people knew him as PAPA. He was a member of the First Christian Church where he was a greeter. Larry also officiated over two of his grandchildren’s weddings. He was a board member of United Way for years. One of his favorite seasons was Fall where he and Ruth would enjoy traveling north to get away and watch the changing colors. He loved driving down to the Illinois River to eat lunch with Ruth. He also loved Fall because he was able to spend time with his boys building their soap box derby cars for Corn Festival. Anyone who knew Larry knew of his love for racing. He could be seen every Memorial Day weekend at the Indianapolis Motor Speedway at the Indy 500 with his sons and family. Larry was a member of his Havana high school tennis team which was his favorite sport to play and as he got older, his favorite sport to watch. He also enjoyed watching his grandchildren play football, baseball, basketball, softball, and dance. He coached Opdyke Baseball for many years. Larry spent winters in Bradenton, FL with his good friends. He liked going to minor league baseball games with his daughter Pam and counting dolphin at the ocean in his convertible while listening to his audiobooks. Some of Papa’s greatest memories were teaching his 10 grandchildren behind-the-wheel driving as soon as they turned 15. Surviving are four children: Pamela (Andrew) Chandler, Doug (Donna) Lines, Mark (Chris) Lines, and Greg (Joan) Lines, all of Morris; grandchildren: Jennifer (Ken) Cox of Morris, Laura (Doug) Roth of South Elgin, Jeff (Courtney) Chandler of New Lenox, Liz Gonzalez of Morris, Chet (Stephanie) Lines of Morris, Eric (Megan) Lines of Bettendorf, IA; Trevor, Leah, Jared and Grace Lines, all of Morris; great-grandchildren: Henry and James Chandler, Nicholas and Nate Cox, Aubrey, Kinsley Lines, Ruthie, Logan, and Landen Lines. Also survived by many nieces and nephews. Preceded in death by his wife, Ruth; his parents; and his grandson, Paul Lines. Visitation will be held 4 p.m. to 8 p.m., Thursday, November 7, at the U.C. Davis-Callahan Funeral Home. A Celebration of Larry’s Life will be held at 11 a.m., Friday, November 8 at the First Christian Church in Morris, officiated by Pastor Scott Zorn. Cremation rites will be accorded. Memorial contributions may be made in Larry’s name to the First Christian Church Arrangements have been entrusted with U.C. Davis-Callahan Funeral Home, 301 W. Washington Street, Morris. For further information visit the website at www.ucdaviscallahan.com or contact the funeral home at 815-942-0084. Online condolences may be directed to the family by visiting the website.