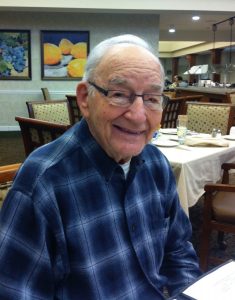 Harold E. Winson, 89, of Springfield, formerly of Havana, passed away on Wednesday, October 30, 2019 at 10:50 p.m. at St. John’s Hospital in Springfield. He was born on November 12, 1929 in Alton to Harvey Eugene and Prudence (Davidson) Winson. He married Norma Jean Vivrette on May 16, 1953 in Wood River. She preceded him in death on October 19, 2005. Mr. Winson is survived by his two sons, Terry (Georgia) Winson of Springfield and Mark (Jonie) Winson of Liberty, and three grandchildren, Courtney Winson, Katie Winson, and Justin Ray. He was preceded in death by his parents and his wife. Mr. Winson was a member of the Havana Southern Baptist Church. He graduated from Alton High School in 1947 and enlisted in the Marines immediately after, where he advanced to the rank of Sergeant and was part of the last United States military to leave China before the Communist takeover. He later received his BA in Science and Technology from Southern Illinois University in 1963. Harold began his career as a lab assistant at the Wood River Power Station in 1953, and was promoted to Chief Chemist at the Illinois Power Station in Havana, where he worked until his retirement in 1989. He was a member of the Gideons and the Bethalto Mason Chapter and was raised to Master Mason in 1958. He served as trustee, deacon, and Sunday school teacher in the Havana and Bethalto Southern Baptist Churches for many years. A visitation will be held on Wednesday, November 6 from 5 p.m. to 8:00 p.m. at Hurley Funeral Home in Havana. Funeral services will be held on Thursday, November 7 at 11 a.m., also at Hurley Funeral Home. Rev. Don Full will officiate. Burial will be held at Rose Lawn Memory Gardens in Bethalto. Memorial donations can be left in Harold’s name to Havana Southern Baptist Church or St. Jude Children’s Research Hospital. Online condolences can be left for the family at www.hurleyfh.com. Hurley Funeral Home in Havana is in charge of arrangements.