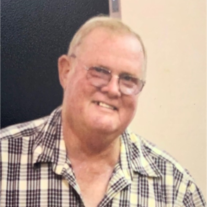 David Deltan Sandidge, 67, of Chandlerville, died at 9:20 p.m., Monday, October 28, 2019, at Walker Nursing Home in Virginia, with his wife, Linda by his side. He was born December 14, 1951, in Jacksonville to Paul and Eleanor (Blair) Sandidge. He married Linda Ruppel on December 14, 1974, at Bethlehem Lutheran Church in Petersburg. Mr. Sandidge is survived by his wife, Linda, of Chandlerville; two sons: Matthew (Courtney) Sandidge and John (Alicia) Sandidge, both of Chandlerville; six grandchildren, who called him “Papa”: Tucker Rowdy, Paul David, Loretta Rose, Burl Thomas, Delta Jane and Isabelle Kay; as well as one sister: Elaine (Larry) Bolt of Springfield and his dog Hank. Also surviving is Jared Richard, who was the “son” that David would have been proud to call his own. He was preceded in death by his parents. David was proud of the two sons he and his wife raised, their families, the crops he grew and the land he farmed. His tractors and combines were as alive to him as any horse pulling a plow in the past. To him, farming was an acknowledgement of God’s existence and His absolute control. He was known for the sweet corn patches planted for the community and the impromptu “big feeds” in the shop for any guy hungry at noontime. He had a ready joke for any occasion. He was more likely to remember the name of the family dog than the names of the rest of the family members. David began farming before graduating in 1970 from Chandlerville High School. He served for 43 years as a board member for Chandlerville Grain Company (1973-1999), Cass County Service Company (1999-2002) and Sunrise Ag Service Company (2002-2006.) He was instrumental in helping form South Sangamon Drainage District with Jerry Brooks. He served on the FSA Committee (2000-2008) and the Chandlerville School Board. He was an avid hunter, who always had a Labrador by his side. In his later years, he enjoyed going on parts runs, feeding the crew late night meals and attending auctions. He had never met a stranger. Visitation will be held on Thursday, October 31, at Lintner-Hurley Funeral Home in Chandlerville from 4 until 7 p.m. Funeral services will be held on Friday, November 1 at 10:30 a.m., also at the funeral home. Burial will follow the services at Chandlerville Cemetery. Tom Carlock will officiate. Memorial contributions may be made to St. Jude’s Children’s Research Hospital, or Chandlerville Cemetery. Online memorial messages may be left for the family at www.hurleyfh.com. Lintner-Hurley Funeral Home in Chandlerville is in charge of arrangements.