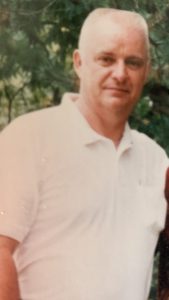 Terry L. Nunn, 73, of Havana passed away Tuesday, October 15, 2019 at OSF St. Francis in Peoria at 4:25 a.m. He was born on July 15, 1946 at home to Perry and Mazie (Holmes) Nunn. He married Bernita Goben on April 29, 1978 at the Mt. Zion Church in Kilbourne. She preceded him in death on November 13, 2018. Terry is survived by his two sons, Patrick (Tammy) Nunn of Kilbourne and Heath (Jade) Nunn of Bath, daughter, Darla Blan of Omaha, Nebraska, ten grandchildren, and sister, Joyce (Wayne) Kolves. He was preceded in death by his parents, wife, and one sister. Terry was an avid Cubs fan. He loved traveling, eating, and shopping. Terry was saved and baptized at the Mt. Zion Baptist Church. Terry worked on a farm in his early years and later sold real estate and worked as a car salesman. Graveside services will be held on Friday, October 18 at 11 a.m. at Bethel Cemetery in Bath. Rev. Randy Wilson will officiate. Memorial donations can be left in Terry’s name to the donor’s choice. Online condolences may be left for the family at www.hurleyfh.com. Hurley Funeral Home in Havana is in charge of arrangements.