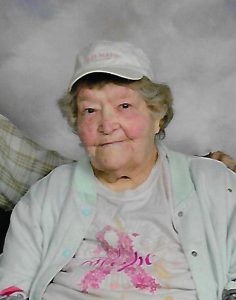 Rosalie A. Shumaker, 81, of Ellisville, went to be with her Lord and Savior, Jesus Christ at 6:12 a.m. Saturday August 24, 2019 at Sunset Manor in Canton. She was born January 23, 1938 at Ray; the daughter of Roy and Anna (Taylor) Learned. She married Lee Shumaker on February 14, 1957 in Bushnell. He survives along with four children, Leann (Marty) Garrett, William (June) Shumaker, Donna Shumaker, and Debbie Shumaker, all of Ellisville; several grandchildren, great grandchildren, and great great grandchildren; and two sisters, Marjorie Ellis and Anna Walton, both of Macomb. She was preceded in death by her parents, two brothers, and four sisters. Rosalie was a member of the Ellisville Church of the Nazarene. She was a stay at home mom for her children’s young lives. She worked at the Blue Bell factory in Bushnell in her early years. She then drove a school bus for Spoon River Valley Schools, and worked at several nursing homes, last working at Prairie City Nursing Center. She loved participating in the Relay for Life events in Canton. Services will be held at 12 noon Tuesday, August 27 at the Smithfield Church of the Nazarene, where visitation will be held 2 hours prior to services. Burial will be in Wiley Cemetery at rural Ellisville. Memorial contributions may be made to the Ellisville Church of the Nazarene, The Relay for Life, Hospice Compassus, or St. Jude. Condolences may be made at henrylange.com