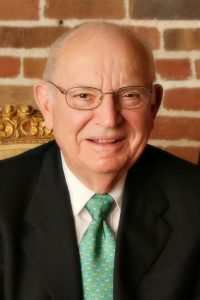 Isaac Newton “Newt” Mitchell, 87, passed away peacefully in his sleep at home on August 4, 2019. He was born March 20, 1932, in Peoria to Forster Isaac and Margaret Pauline (Hepworth) Mitchell. He married Adah Joan Wiseman on November 14, 1966, at St. Barnabas Episcopal Church in Havana, and she survives. He is also survived by two daughters, Cynthia O’Hanlon (husband, John) of Rockville, MD, and Joan DeBoer (husband, Jeffrey) of Alexandria, VA; and four grandsons, Quinn O’Hanlon, Patrick O’Hanlon, Jack O’Hanlon and Mitchell DeBoer. He was preceded in death by his parents. Mr. Mitchell graduated from Havana High School in 1950, which was followed by a college preparatory year at The Bullis School in Maryland. In 1955, he received his Bachelor of Business Administration degree from the University of New Mexico in Albuquerque. After completion of the United States Naval Reserve Officer Training Corps at the University of New Mexico, Mr. Mitchell received the commission as an Ensign. He was also a proud member of the Sigma Chi Fraternity, Beta Xi Chapter. From 1955-1957, Mr. Mitchell served active duty in the United States Navy. He spent the majority of his duty on the newly commissioned supercarrier, the USS Forrestal. In 1957, Mr. Mitchell was honorably discharged from active duty as a Lieutenant Junior Grade. After his Naval service he accepted a position with the Mississippi Valley Barge Line Company, traveling between St. Louis, MO, and Tampa, FL. In 1961, Mr. Mitchell moved to Jacksonville and began his career at the Jacksonville Savings and Loan Association. He served the institution for over 38 years, retiring from the Jacksonville Savings Bank as Vice President and a Member of the Board of Directors in 1999. In addition to his successful banking career, Mr. Mitchell participated in a wide variety of civic activities. He was an active member and supporter of the Jacksonville Chamber of Commerce; Jacksonville Rotary Club; The Art Association of Jacksonville; Jacksonville Elks Lodge 682; Jacksonville High School Athletics Booster Club; and Jacksonville Country Club. After retirement, Mr. Mitchell enjoyed volunteering in the Jacksonville community. He was a loyal blood donor with Passavant Area Hospital and enjoyed many years volunteering with the Hospital’s Doorbell Dinners program. Faith was a big part of Mr. Mitchell’s life. He was an active member of Trinity Episcopal Church, where he served as a member of the Vestry and as a Senior Warden. Mr. Mitchell was a devoted son, husband, father and grandfather. The times he cherished most were those spent with his family. He enjoyed traveling and treasured the many trips with his family and friends. Other favorite pastimes included gardening, fishing, Cubs baseball, and the Thursday Night Football Pool. A visitation will be from 4 to 6 p.m. on Friday, August 9, 2019, at the Buchanan & Cody Funeral Home in Jacksonville. The funeral service will be held at 11 a.m. on Saturday, August 10, 2019, at Trinity Episcopal Church in Jacksonville. Interment will be at Diamond Grove Cemetery. Memorial donations may be made to The Art Association of Jacksonville, Passavant Hospital Foundation, or Trinity Episcopal Church. Condolences may be left for the family at buchanancody.com.