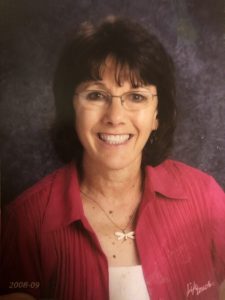 Christy Anne Edwards, 64, of Cuba, passed away at 1:32 a.m. Sunday, July 28, 2019 at OSF St Francis Medical Center in Peoria. She was born May 12, 1955 in Canton, the daughter of Billy and Shirley (Baughman) Swango. She married Jerry Edwards on October 18, 2014. He survives along with her parents, Bill and Shirley Swango of Smithfield; her children, Michelle (John) Berryman of Morton and Dave (Amy) Edwards of Chatham; one grandson, Isaac Edwards; one brother, Roger (Rosalie) Swango of Smithfield; one nephew, Bret Swango; two nieces, Nichole Swango and Billie Drazenovic; two grandnieces, Kyla Roome, and Andi Drazenovic; and one grandnephew, Mikko Drazenovic. She was preceded in death by her maternal and paternal grandparents, and an aunt and uncle, Carole and Buz Phillips. Christy’s hobbies included bird watching, spending time with and cooking for her family, and she was an avid Cubs fan. She was known for her big hugs, radiant smile, sparkly eyes, and most of all – her compassionate soul. Christy was a strong Christian whose life mission was helping others. Christy especially loved helping children, both professionally as a speech pathologist for the West Central Illinois Special Education Coop and through various leadership roles at Brock United Methodist Church in Smithfield, where she was an active member. Her impact was felt locally through her work as co-director of vacation bible school in Smithfield and abroad as she made several mission trips to Guatemala over the past few years. Additionally, she led the Operation Christmas Child program for the Brock United Methodist Church which collected various personal care items to ship to third world countries and volunteered regularly at the Red Brick School. Christy was a faithful servant to her Lord; this world is a worse place without her but a better place because of her. She will be dearly missed. Services will be held at 12 p.m. on Friday at Henry-Lange Memorial Home in Cuba, where visitation will be held 3 hours prior to services. Burial will be at Baughman Cemetery in rural Smithfield. Memorial contributions may be made to Brock United Methodist Church or Operation Christmas Child. To view Christy’s life tribute video or to send condolences visit henrylange.com.