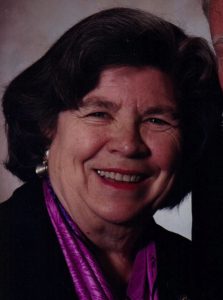 Martha H. Murphy , age 88, of 510 East Avenue E, Lewistown, Illinois passed away July 17, 2019 at Richard L. Owens Hospice House, Peoria. Martha Murphy was born in Lakewood, Ohio on January 9, 1931. She was preceded in her death by her parents, Walter and Virginia Quallich and sister Nancy Shipman. She is survived by sisters, Virginia (Ginny) Case and Margaret (Peggy) Flynn. Martha (Marty) was an accomplished classical musician and singer. She played cello, piano and harp. Upon high school graduation she enrolled in the School of Music at the University of Illinois and was graduated in 1953. At the U of I, Marty met Edward Murphy, a veterinary student. It would be hard to imagine a couple with backgrounds more different. However, they married in 1952 and in 1953 moved to Lewistown. Upon settling, Marty briefly taught music while she and Doc Murphy established a veterinary practice. Six children soon followed. The veterinary practice thrived and though Doc was the practitioner, Marty was an indispensable partner. She deftly juggled household and business responsibilities. Though to a large extent music had to take a back seat, Marty still found time to sing with the “Mother Singers” who performed in the community. Later, along with Frances Jeppeson and Judy Pereboom she performed with the Lewistown Municipal String Trio. In her later years, she played piano and organ in support of the choir in the Lewistown Catholic Church. Throughout the years she also privately taught a large number of piano students. Marty was very talented in other ways as well. She rode horses, sewed many a patch, made pints of jellies and pickles, was a very good cook, found time to garden and looked after a great many animals. To her children though, Marty was Mom. She was always supportive, always helpful, always devoted. She did not actively parent very much. Rather, she taught by example and for the most part we followed. She taught us music, she taught us to be truthful, she taught us to respect others. Above all, she was willing to sacrifice for our well being. Marty never said a bad word about anyone. No one was beyond redemption. She was unfailingly optimistic and believed people were inherently good. Marty’s faith was very important. Although there were few other Christian Science worshipers in her community she always practiced her beliefs. Edward and Martha made their home in Lewistown raising their six children: Timothy Murphy (Marcy), Moline; June Behles, Des Plaines; Linda Murphy (John Vinzant), Gary, IN; Daniel Murphy (Theresa), Davenport, IA; Kathleen Arnett (Roger), Lewistown; and Brian Murphy, Monterery. Nine grandchildren and 9 great-grandchildren will all miss Grandma. Funeral services will be held at 1:30 p.m. Tuesday at the Henry-Lange Memorial Home in Lewistown with Reverend Shane Smith officiating. Burial will be at St. Mary’s Cemetery in Lewistown. Visitation will be held from 5 to 7 p.m. Monday at the memorial home. Memorial contributions can be made to the Pet Fix Alliance or to the Fulton County Humane Society. To view Martha’s life tribute video or to send online condolences visit henrylange.com.