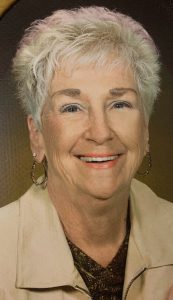 Marilyn J. VanOrman, age 90, of Pekin, formerly of Manito, passed away on Wednesday, June 26, 2019 at the Villas of Holly Brook in Pekin. She was born to the late Henry and Marjorie (Fuqua) Smith on December 24, 1928 in Lincoln. She married William W. Thompson on July 1, 1949 in Manito, and he preceded her in death on July 7, 1994, just after their 45th wedding anniversary. She later married Forrest E. VanOrman on November 27, 2003 at Forest City Community Church. She was also preceded in death by brothers, Earl Smith and Lesley Smith; nephew, Scott Talbott; and stepson, David VanOrman. She is survived by her husband of 15 years, Forrest VanOrman of Pekin; children, Mark (Sheila) Thompson of Panama City Beach, FL and Steve Thompson of Utah; grandchildren, Stacy (Jeff) Lawrence of Jacksonville, FL and Jeff Thompson and his special friend Tracey of Pekin; great-granddaughter, Sophia; sister, Marjorie Talbott of Manito; one niece; one great-niece; one great-nephew; stepson, Rick VanOrman; step daughter-in-law, Sarah VanOrman; and several grandchildren and great-grandchildren. Marilyn was a member of Forest City Community Church with her husband Forrest, a member of the Manito-Forest City Rotary Club, and recipient of the Paul Harris Fellowship Award in recognition of her contributions as a community professional and placing “service above self.” She worked as a clerk at the United States Postal Service office in Manito for 24 years. In her free time, Marilyn enjoyed spending time with her family and tending to her flowers. A graveside service for Marilyn will be held at 11 a.m. on Tuesday, July 2 at Meadow Lawn Cemetery in Manito. Pastor Frank Brozenec will officiate. Maas-Hurley Funeral Home is assisting the family with arrangements. Memorial donations in honor of Marilyn may be made to the Marilyn Thompson VanOrman Fund and will be used for clothing and shoes for needy children at Midwest Central. Online condolences may be left at www.hurleyfh.com