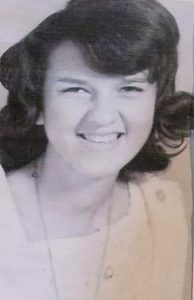 Irene M. Baughman, 70, of Havana passed away at Memorial Medical Center on June 10, 2019 surrounded by her family. She was born February 9, 1949 in Peoria to William and Alice Carlson. She married James E. Baughman at the Church of the Nazarene in Havana on March 2, 1965. Irene is survived by her husband Jim of Havana, her children: Bill (Robin) Baughman of Havana and Paula (Ken) Morris of Canton; grandchildren: C.J. (fiancé Emily) Baughman, Amber (fiancé Brad) Wolfe of Peoria, and Ashton Wolfe of Canton; step grandchildren: Ryan and Colton Morris of Mahomet; siblings: Barbie (Ron) Schnoor of Easton and Bill (Joy) Heath of California, and several nieces, nephews, and friends. She was preceded in death by her parents, brothers: Jim and Auggie, sister, Millie, and grandson William Baughman, Jr. Irene was an avid video gamer (just ask her grandchildren). She loved to go camping and enjoyed crafts and making blankets. Her dog, Chance, was a very important part of her life. She was a loving and caring wife, mother, grandmother, sister, and aunt. She was loved and will be missed by all who knew her. Graveside services will be held on Friday, June 14 at 1:30 p.m. at Laurel Hill Cemetery in Havana. Memorial donations can be made the the Irene Baughman Memorial Fund at Petefish & Skiles Bank to help family with expenses. Online condolences can be left for the family at www.hurleyfh.com. Hurley Funeral Home in Havana is assisting with arrangements.