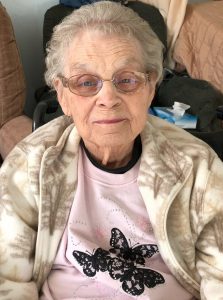 Patsy L. Hensley, 84, of Marietta, IL passed away at 6 a.m. on Wednesday, June 5, 2019 at the Clayberg Fulton County Nursing Center in Cuba. She was born October 21, 1934 in rural Marietta to Dwight and Cordia (Huddleston) Shaver. She married Clair “Corky” B. Hensley on May 2, 1952 in Bushnell; he preceded her in death on November 22, 2012. She was also preceded in death by her parents, and one brother, Kent Shaver. She is survived by four children, Garry (Deb) Hensley of Cuba, Teresa (Jerry) Baughman of Cuba, Kevin Hensley of Manhattan, KS, Jamey (Linda Williams) Hensley of Canton; ten grandchildren; sixteen great-grandchildren; and two step-great-grandchildren. Patsy was a loving mother and housewife for many years and attended Point Pleasant United Methodist Church. In 1973, she became a cook in the Cuba High School cafeteria and in 1991 she retired after 18 years of service to the school district. For many years she served as an election judge for Harris Township. She and her husband enjoyed traveling to Branson and Lake of the Ozarks several times a year. Patsy enjoyed cooking, and especially loved baking pies and cupcakes for her family. Most of all, she loved being with her children, grandchildren, and great-grandchildren. Funeral services will be held at 11 a.m. on Monday, June 10 at the Martin-Hollis Funeral Home, where visitation will be one hour prior to the service. Pastor Jim Eddy will officiate. Interment will be in Marietta Cemetery. Memorial contributions can be made to the Clayberg Fulton County Nursing Center. Please sign the guestbook and leave condolences at www.martinhollisfh.com